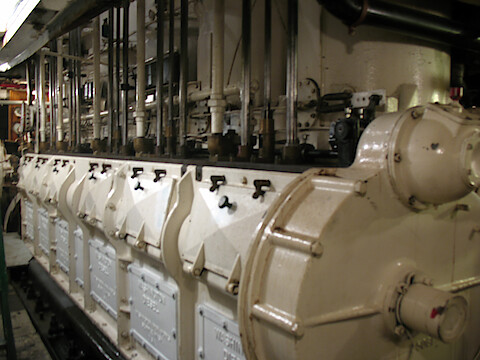 Five years after the Foss Launch and Tug Company purchased the steam tug Wallowa, they rebuilt her from the hull up into a modern diesel tug. Renamed the Arthur Foss after the 1934 conversion, the rebuilt tug was powered by one of the largest Washington Iron Works diesel engines ever built. With six 18" x 24" cylinders that generated between 700 and 900 horsepower, the engine made the Arthur one of the most powerful tugs on the West Coast.

When the Foss Maritime Company retired the tug in 1970, they donated her to a Seattle-based historic ship preservation group named Northwest Seaport. Under the direction of Foss mechanics, volunteers overhauled the engine in the early 1980s and restored it to operational condition for the first time since the tug's retirement. Powered again by her Washington engine, the Arthur Foss became a favorite participant in maritime festivals and tugboat races. In 1989, the vessel was declared a National Historic Landmark in recognition of its significance as a Northwest tugboat.

The Arthur continued to cruise with a volunteer crew until 2001, when the throw-out bearing was damaged. Lacking a qualified mechanic and the significant funds to repair this piece of the clutch, the tug remained at the dock for several years and restoration efforts focused on her decks and bulwarks. Rumors spread through Seattle's maritime heritage community that the big engine had seized.

In 2004, Old Tacoma Marine Inc pushed the valves down and barred the engine forward during a condition survey--showing that the Arthur Foss's engine had not seized and could be returned to operating condition with a little oiling, a little machining--and a valve job. The company has since partnered with Northwest Seaport to host the Diesel Engine Theory workshop series, a public programmed aimed at educating participants about heavy-duty diesel engine repair while restoring the 1934 engine. The 2005 workshop session serviced the valves, destroying several extensively corroded cages but successfully rebuilding fourteen valve cages--twelve for the engine and two for the spare parts collection. The 2006 workshop session rebuilt the fuel injectors and reset them to the original Washington Iron Works factory specifications, as outlined in the operation manual

December 2007: the Arthur Foss's throw-out bearing was repaired during the 2007 Diesel Engine Theory Workshop, hosted by Northwest Seaport in partnership with the Center for Wooden Boats and Old Tacoma Marine Inc. Everett Engineering Inc. rebabbitted the bearing, returning it to operational condition and allowing the Arthur's propeller to be engaged for the first time since 2001. Read more about this project at Northwest Seaport's website here.